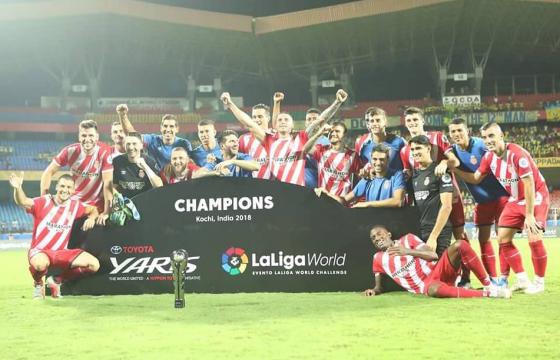 The first international club tournament of it's kind in India closed with the La Liga side showing their dominance.

Girona overpowered Kerela Blasters in the final match of the World United tournament in Kochi, India.  Continuing their success over Melbourne City FC, Girona hit the blasters for 5 to lift the trophy, playing two matches scoring 11 goals and concending 0 in the process.

David James post match was not too downbeat over the Blasters' performance:

"Playing against a team that features in the top 3 leagues of the world is in itself a big feat.  We managed to keep things pretty tight in the first half, the final score line definitely doesn't suggest the same but I think we looked a much improved side today from the first match".

Finally, a thank you from Integer Sport to all the fans who came to watch and enjoy this spectacle.  We hope to be back in India soon, brinig more teams for the fans to enjoy!